Up to this point, we have been drawing super simple shapes. While we can make a game with just triangles, trying to draw highly detailed objects would massively limit what devices could even run our game. However, we can get around this problem with textures.

Textures are images overlaid on a triangle mesh to make it seem more detailed. There are multiple types of textures such as normal maps, bump maps, specular maps, and diffuse maps. We're going to talk about diffuse maps, or more simply, the color texture.

If we want to map an image to our mesh, we first need an image. Let's use this happy little tree: 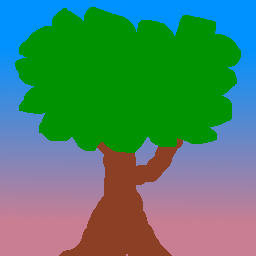 We'll use the image crate (opens new window) to load our tree. Let's add it to our dependencies:

The jpeg decoder that image includes uses rayon (opens new window) to speed up the decoding with threads. WASM doesn't support threads currently so we need to disable this so that our code won't crash when we try to load a jpeg on the web.

Decoding jpegs in WASM isn't very performant. If you want to speed up image loading in general in WASM you could opt to use the browser's built-in decoders instead of image when building with wasm-bindgen. This will involve creating an <img> tag in Rust to get the image, and then a <canvas> to get the pixel data, but I'll leave this as an exercise for the reader.

In State's new() method add the following just after configuring the surface:

Here we grab the bytes from our image file and load them into an image which is then converted into a Vec of rgba bytes. We also save the image's dimensions for when we create the actual Texture.

# Getting data into a Texture

The Texture struct has no methods to interact with the data directly. However, we can use a method on the queue we created earlier called write_texture to load the texture in. Let's take a look at how we do that:

The old way of writing data to a texture was to copy the pixel data to a buffer and then copy it to the texture. Using write_texture is a bit more efficient as it uses one buffer less - I'll leave it here though in case you need it.

The bytes_per_row field needs some consideration. This value needs to be a multiple of 256. Check out the gif tutorial for more details.

Now that our texture has data in it, we need a way to use it. This is where a TextureView and a Sampler come in. A TextureView offers us a view into our texture. A Sampler controls how the Texture is sampled. Sampling works similar to the eyedropper tool in GIMP/Photoshop. Our program supplies a coordinate on the texture (known as a texture coordinate), and the sampler then returns the corresponding color based on the texture and some internal parameters.

The address_mode_* parameters determine what to do if the sampler gets a texture coordinate that's outside the texture itself. We have a few options to choose from:

The mag_filter and min_filter fields describe what to do when the sample footprint is smaller or larger than one texel. These two fields usually work when the mapping in the scene is far from or close to the camera.

Mipmaps are a complex topic and will require their own section in the future. For now, we can say that mipmap_filter functions similar to (mag/min)_filter as it tells the sampler how to blend between mipmaps.

I'm using some defaults for the other fields. If you want to see what they are, check the wgpu docs (opens new window).

All these different resources are nice and all, but they don't do us much good if we can't plug them in anywhere. This is where BindGroups and PipelineLayouts come in.

A BindGroup describes a set of resources and how they can be accessed by a shader. We create a BindGroup using a BindGroupLayout. Let's make one of those first.

Our texture_bind_group_layout has two entries: one for a sampled texture at binding 0, and one for a sampler at binding 1. Both of these bindings are visible only to the fragment shader as specified by FRAGMENT. The possible values for this field are any bitwise combination of NONE, VERTEX, FRAGMENT, or COMPUTE. Most of the time we'll only use FRAGMENT for textures and samplers, but it's good to know what else is available.

Looking at this you might get a bit of déjà vu! That's because a BindGroup is a more specific declaration of the BindGroupLayout. The reason they're separate is that it allows us to swap out BindGroups on the fly, so long as they all share the same BindGroupLayout. Each texture and sampler we create will need to be added to a BindGroup. For our purposes, we'll create a new bind group for each texture.

Now that we have our diffuse_bind_group, let's add it to our State struct:

Make sure we return these fields in the new method:

Now that we've got our BindGroup, we can use it in our render() function.

# A change to the VERTICES

There are a few things we need to change about our Vertex definition. Up to now, we've been using a color attribute to set the color of our mesh. Now that we're using a texture, we want to replace our color with tex_coords. These coordinates will then be passed to the Sampler to retrieve the appropriate color.

Since our tex_coords are two dimensional, we'll change the field to take two floats instead of three.

And then reflect these changes in the VertexBufferLayout:

Lastly, we need to change VERTICES itself. Replace the existing definition with the following:

With our new Vertex structure in place, it's time to update our shaders. We'll first need to pass our tex_coords into the vertex shader and then use them over to our fragment shader to get the final color from the Sampler. Let's start with the vertex shader:

Now that we have our vertex shader outputting our tex_coords, we need to change the fragment shader to take them in. With these coordinates, we'll finally be able to use our sampler to get a color from our texture.

The variables t_diffuse and s_diffuse are what's known as uniforms. We'll go over uniforms more in the cameras section. For now, all we need to know is that group() corresponds to the 1st parameter in set_bind_group() and binding() relates to the binding specified when we created the BindGroupLayout and BindGroup.

If we run our program now we should get the following result: 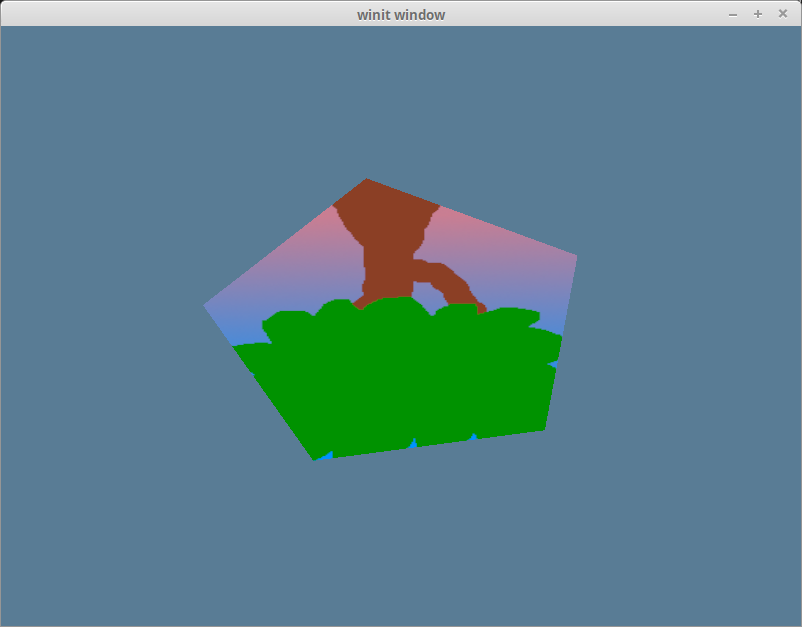 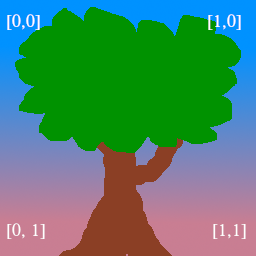 We can get our triangle right-side up by replacing the y coordinate y of each texture coordinate with 1 - y:

With that in place, we now have our tree right-side up on our pentagon: 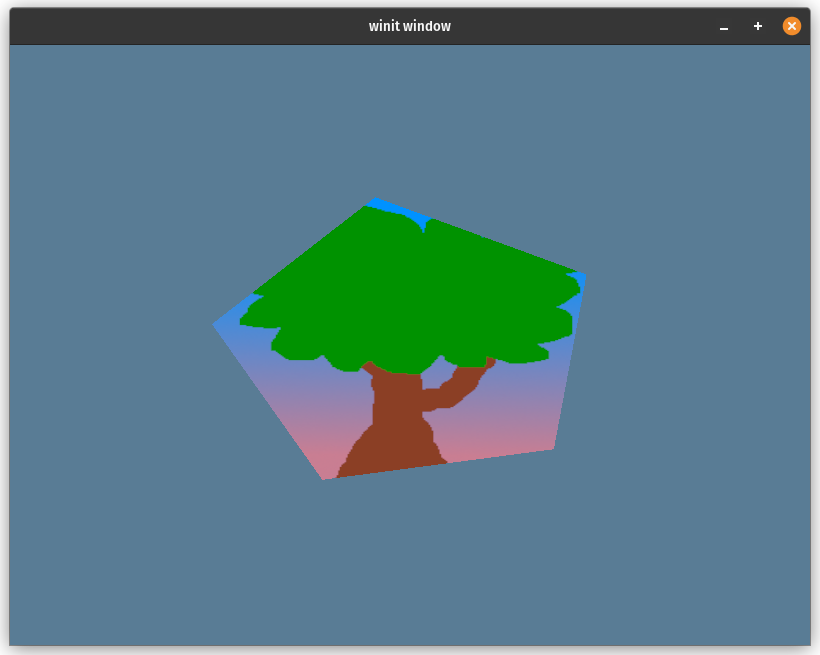 For convenience, let's pull our texture code into its own module. We'll first need to add the anyhow (opens new window) crate to our Cargo.toml file to simplify error handling;

Then, in a new file called src/texture.rs, add the following:

We need to import texture.rs as a module, so somewhere at the top of lib.rs add the following.

The texture creation code in new() now gets a lot simpler:

We still need to store the bind group separately so that Texture doesn't need to know how the BindGroup is laid out. The creation of diffuse_bind_group slightly changes to use the view and sampler fields of diffuse_texture:

Finally, let's update our State field to use our shiny new Texture struct, as we'll need it in future tutorials.

With these changes in place, the code should be working the same as it was before, but we now have a much easier way to create textures.

Create another texture and swap it out when you press the space key.

← Buffers and Indices Uniform buffers and a 3d camera →