# We're finally talking about them!

A buffer is a blob of data on the GPU. A buffer is guaranteed to be contiguous, meaning that all the data is stored sequentially in memory. Buffers are generally used to store simple things like structs or arrays, but they can store more complex stuff such as graph structures like trees (provided all the nodes are stored together and don't reference anything outside of the buffer). We are going to use buffers a lot, so let's get started with two of the most important ones: the vertex buffer, and the index buffer.

Previously we've stored vertex data directly in the vertex shader. While that worked fine to get our bootstraps on, it simply won't do for the long term. The types of objects we need to draw will vary in size, and recompiling the shader whenever we need to update the model would massively slow down our program. Instead, we are going to use buffers to store the vertex data we want to draw. Before we do that though we need to describe what a vertex looks like. We'll do this by creating a new struct.

Our vertices will all have a position and a color. The position represents the x, y, and z of the vertex in 3d space. The color is the red, green, and blue values for the vertex. We need the Vertex to be Copy so we can create a buffer with it.

Next, we need the actual data that will make up our triangle. Below Vertex add the following.

We arrange the vertices in counter-clockwise order: top, bottom left, bottom right. We do it this way partially out of tradition, but mostly because we specified in the primitive of the render_pipeline that we want the front_face of our triangle to be wgpu::FrontFace::Ccw so that we cull the back face. This means that any triangle that should be facing us should have its vertices in counter-clockwise order.

Now that we have our vertex data, we need to store it in a buffer. Let's add a vertex_buffer field to State.

To import the extension trait, put this line somewhere near the top of lib.rs.

You'll note that we're using bytemuck (opens new window) to cast our VERTICES as a &[u8]. The create_buffer_init() method expects a &[u8], and bytemuck::cast_slice does that for us. Add the following to your Cargo.toml.

If your struct includes types that don't implement Pod and Zeroable, you'll need to implement these traits manually. These traits don't require us to implement any methods, so we just need to use the following to get our code to work.

Finally, we can add our vertex_buffer to our State struct.

A VertexBufferLayout defines how a buffer is represented in memory. Without this, the render_pipeline has no idea how to map the buffer in the shader. Here's what the descriptor for a buffer full of Vertex would look like.

For you visual learners, our vertex buffer looks like this.

Let's create a static method on Vertex that returns this descriptor.

Specifying the attributes as we did now is quite verbose. We could use the vertex_attr_array macro provided by wgpu to clean things up a bit. With it our VertexBufferLayout becomes

While this is definitely nice, Rust sees the result of vertex_attr_array as a temporary value, so a tweak is required to return it from a function. We could change the lifetime on wgpu::VertexBufferLayout to 'static, or make it const (opens new window). You can see an example below:

Regardless I feel it's good to show how the data gets mapped, so I'll forgo using this macro for now.

Now we can use it when we create the render_pipeline.

One more thing: we need to actually set the vertex buffer in the render method otherwise our program will crash.

set_vertex_buffer takes two parameters. The first is what buffer slot to use for this vertex buffer. You can have multiple vertex buffers set at a time.

Before we continue, we should change the render_pass.draw() call to use the number of vertices specified by VERTICES. Add a num_vertices to State, and set it to be equal to VERTICES.len().

Then use it in the draw call.

Before our changes will have any effect, we need to update our vertex shader to get its data from the vertex buffer. We'll also have it include the vertex color as well.

If you've done things correctly, you should see a triangle that looks something like this. 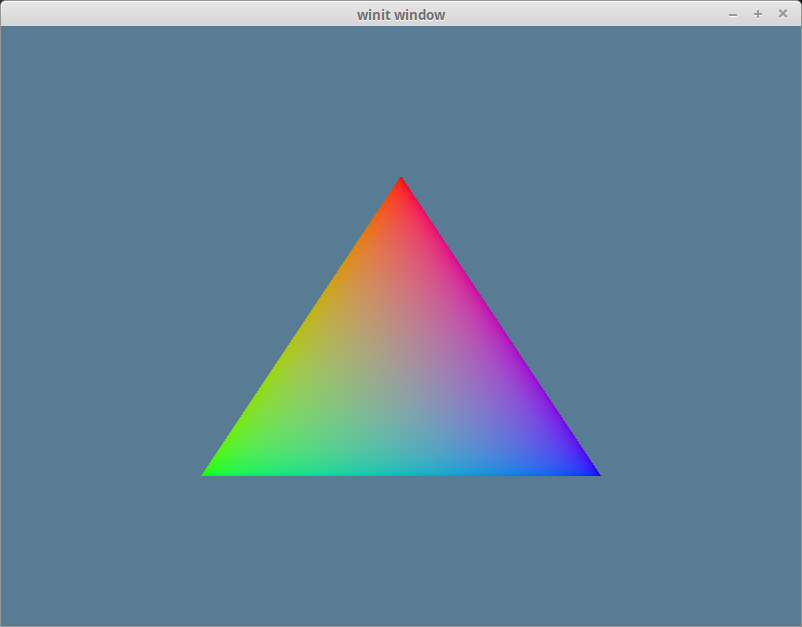 We technically don't need an index buffer, but they still are plenty useful. An index buffer comes into play when we start using models with a lot of triangles. Consider this pentagon. 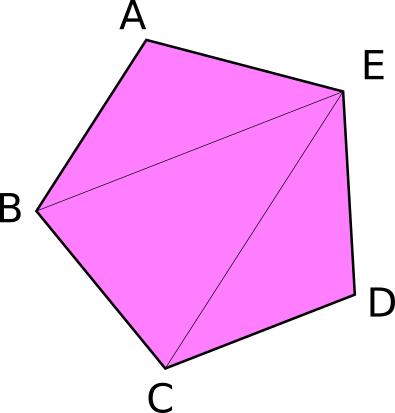 You'll note though that some of the vertices are used more than once. C, and B get used twice, and E is repeated 3 times. Assuming that each float is 4 bytes, then that means of the 216 bytes we use for VERTICES, 96 of them are duplicate data. Wouldn't it be nice if we could list these vertices once? Well, we can! That's where an index buffer comes into play.

Basically, we store all the unique vertices in VERTICES and we create another buffer that stores indices to elements in VERTICES to create the triangles. Here's an example of that with our pentagon.

Now with this setup, our VERTICES take up about 120 bytes and INDICES is just 18 bytes given that u16 is 2 bytes wide. In this case, wgpu automatically adds 2 extra bytes of padding to make sure the buffer is aligned to 4 bytes, but it's still just 20 bytes. All together our pentagon is 140 bytes in total. That means we saved 76 bytes! It may not seem like much, but when dealing with tri counts in the hundreds of thousands, indexing saves a lot of memory.

There are a couple of things we need to change in order to use indexing. The first is we need to create a buffer to store the indices. In State's new() method, create the index_buffer after you create the vertex_buffer. Also, change num_vertices to num_indices and set it equal to INDICES.len().

We don't need to implement Pod and Zeroable for our indices, because bytemuck has already implemented them for basic types such as u16. That means we can just add index_buffer and num_indices to the State struct.

And then populate these fields in the constructor:

All we have to do now is update the render() method to use the index_buffer.

A couple things to note:

With all that you should have a garishly magenta pentagon in your window.

Most monitors use a color space known as sRGB. Our surface is (most likely depending on what is returned from surface.get_preferred_format()) using an sRGB texture format. The sRGB format stores colors according to their relative brightness instead of their actual brightness. The reason for this is that our eyes don't perceive light linearly. We notice more differences in darker colors than we do in lighter colors.

Create a more complex shape than the one we made (aka. more than three triangles) using a vertex buffer and an index buffer. Toggle between the two with the space key.

← The Pipeline Textures and bind groups →