If you're familiar with OpenGL, you may remember using shader programs. You can think of a pipeline as a more robust version of that. A pipeline describes all the actions the gpu will perform when acting on a set of data. In this section, we will be creating a RenderPipeline specifically.

Shaders are mini-programs that you send to the gpu to perform operations on your data. There are 3 main types of shader: vertex, fragment, and compute. There are others such as geometry shaders, but they're more of an advanced topic. For now, we're just going to use vertex, and fragment shaders.

# Vertex, fragment... what are those?

A vertex is a point in 3d space (can also be 2d). These vertices are then bundled in groups of 2s to form lines and/or 3s to form triangles. 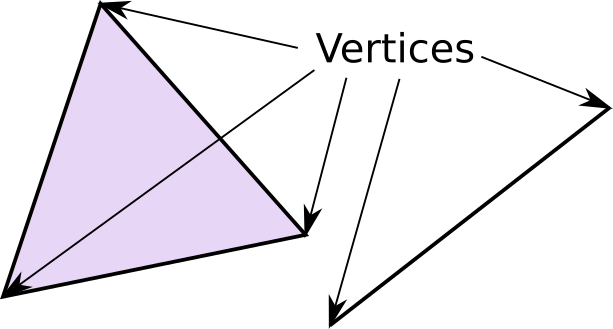 Most modern rendering uses triangles to make all shapes, from simple shapes (such as cubes) to complex ones (such as people). These triangles are stored as vertices which are the points that make up the corners of the triangles.

We use a vertex shader to manipulate the vertices, in order to transform the shape to look the way we want it.

The vertices are then converted into fragments. Every pixel in the result image gets at least one fragment. Each fragment has a color that will be copied to its corresponding pixel. The fragment shader decides what color the fragment will be.

WebGPU Shading Language (opens new window) (WGSL) is the shader language for WebGPU. WGSL's development focuses on getting it to easily convert into the shader language corresponding to the backend; for example, SPIR-V for Vulkan, MSL for Metal, HLSL for DX12, and GLSL for OpenGL. The conversion is done internally and we usually don't need to care about the details. In the case of wgpu, it's done by the library called naga (opens new window).

Note that, at the time of writing this, some WebGPU implementations also support SPIR-V, but it's just a temporary measure during the transition period to WGSL and will be removed (If you are curious about the drama behind SPIR-V and WGSL, please refer to this blog post (opens new window)).

If you've gone through this tutorial before you'll likely notice that I've switched from using GLSL to using WGSL. Given that GLSL support is a secondary concern and that WGSL is the first-class language of WGPU, I've elected to convert all the tutorials to use WGSL. Some showcase examples still use GLSL, but the main tutorial and all examples going forward will be using WGSL.

The WGSL spec and its inclusion in WGPU are still in development. If you run into trouble using it, you may want the folks at https://app.element.io/#/room/#wgpu:matrix.org (opens new window) to take a look at your code.

In the same folder as main.rs, create a file shader.wgsl. Write the following code in shader.wgsl.

First, we declare struct to store the output of our vertex shader. This consists of only one field currently which is our vertex's clip_position. The @builtin(position) bit tells WGPU that this is the value we want to use as the vertex's clip coordinates (opens new window). This is analogous to GLSL's gl_Position variable.

Vector types such as vec4 are generic. Currently, you must specify the type of value the vector will contain. Thus, a 3D vector using 32bit floats would be vec3<f32>.

The next part of the shader code is the vs_main function. We are using @vertex to mark this function as a valid entry point for a vertex shader. We expect a u32 called in_vertex_index which gets its value from @builtin(vertex_index).

We then declare a variable called out using our VertexOutput struct. We create two other variables for the x, and y, of a triangle.

Variables defined with var can be modified but must specify their type. Variables created with let can have their types inferred, but their value cannot be changed during the shader.

Now we can save our clip_position to out. We then just return out and we're done with the vertex shader!

We technically didn't need a struct for this example, and could have just done something like the following:

We'll be adding more fields to VertexOutput later, so we might as well start using it now.

Next up, the fragment shader. Still in shader.wgsl add the following:

This sets the color of the current fragment to brown.

Notice that the entry point for the vertex shader was named vs_main and that the entry point for the fragment shader is called fs_main. In earlier versions of wgpu it was ok for both these functions to have the same name, but newer versions of the WGSL spec (opens new window) require these names to be different. Therefore, the above-mentioned naming scheme (which is adopted from the wgpu examples) is used throughout the tutorial.

The @location(0) bit tells WGPU to store the vec4 value returned by this function in the first color target. We'll get into what this is later.

Something to note about @builtin(position), in the fragment shader this value is in framebuffer space (opens new window). This means that if your window is 800x600, the x and y of clip_position would be between 0-800 and 0-600 respectively with the y = 0 being the top of the screen. This can be useful if you want to know pixel coordinates of a given fragment, but if you want the position coordinates you'll have to pass them in separately.

# How do we use the shaders?

This is the part where we finally make the thing in the title: the pipeline. First, let's modify State to include the following.

Now let's move to the new() method, and start making the pipeline. We'll have to load in those shaders we made earlier, as the render_pipeline requires those.

You can also use include_wgsl! macro as a small shortcut to create the ShaderModuleDescriptor.

One more thing, we need to create a PipelineLayout. We'll get more into this after we cover Buffers.

Finally, we have all we need to create the render_pipeline.

The primitive field describes how to interpret our vertices when converting them into triangles.

The rest of the method is pretty simple:

Now, all we have to do is add the render_pipeline to State and then we can use it!

If you run your program now, it'll take a little longer to start, but it will still show the blue screen we got in the last section. That's because we created the render_pipeline, but we still need to modify the code in render() to actually use it.

We didn't change much, but let's talk about what we did change.

With all that you should be seeing a lovely brown triangle.

Create a second pipeline that uses the triangle's position data to create a color that it then sends to the fragment shader. Have the app swap between these when you press the spacebar. Hint: you'll need to modify VertexOutput

← The Surface Buffers and Indices →